Palm Springs is the kind of film that reminds us that unique cinema is still very much possible. One of the most wildly original works of filmmaking of the past few years, a piece that blends science fiction, romance and comedy in sometimes surprising ways, Max Barbakow’s directorial debut is quite an achievement – and the best part is that it is such an unassuming, simple film, not weighed down by its own originality, but rather the scrappy little comedy that proves the boundless limits of human creativity should we be compelled to actually do something new – and while there may be rousing cries that this premise sounds vaguely familiar, what Barbakow does with the story, and how he takes it in some unexpectedly strange but utterly fascinating directions is a testament to something very special lurking beneath this film, a resilient sense of humour that can only come from a complete abandonment of logic, and where the best kind of narrative chaos can take over, resulting a charming comedy that may appear slight at first, but flourishes into one of the year’s most touching films, a quaint but impactful work of unhinged comic anarchy that brings a terrific cast, an impeccable script and a wealth of endearing ideas to the screen in a way that should not have been nearly as entertaining as it was, and which leaves quite an impression without ever once appear inauthentic or heavy-handed. In short, Barbakow has made quite an audacious debut with Palm Springs, which is a cult classic waiting to be discovered by worldwide audiences, who will undoubtedly fall in love with this beautifully deranged and extraordinarily special little film.

When attempting to dissect Palm Springs and understand how it is so much more than a slight comedy with an above-average premise comes in how far we’re willing to look into it and understand it as something more than just what it appears to be on the surface, which is often the key to uncovering the brilliance of many great comedies. Through taking its cue from a lot of speculative fiction, and absolutely a wonderful homage to the seminal 1990s classic Groundhog Day (but only in terms of the basic premise being that of being trapped in a time-loop, one of the most ambitious premises that you’d think the industry would have exploited more, but which has remained quite niche even a quarter of a century later), the film ventures beyond the confines of ordinary comedy and instead situates itself on the outskirts of what we normally perceive mainstream humour to be, particularly in how it’s built on a continuous attempt to build our expectations and subsequently deconstruct them in a way that isn’t disappointing, but rather incredibly surprising. It certainly has all the traditional components of a likeable but unremarkable comedic film – a bawdy sense of humour, overtures of romance and what appears to be quite a trite story structure, where it seems like it’s following the same exact beats. There’s definitely nothing in theory that would suggest Palm Springs as anything particularly special – and in fact, the film seems to enjoy throwing the viewer into the story in media res, where we feverishly try and grapple for some sense, which gradually comes to us as we journey further on into the story. Once everything becomes clear, its possible to finally acknowledge Palm Springs as something special and worth investigating further, since this is not an ordinary comedy, despite featuring all the conventional elements that would go into it.

Inspired less by the broad comedies that it may be compared to in terms of its most superficial qualities, and more by abstract surrealism (which understandably hasn’t found its place in mainstream comedy), Barbakow’s film is quite eccentric in its approach, never wasting a single moment on anything that can be considered unnecessary, each moment playing a pivotal part in the narrative, even if we only realize it much later. Many who have been enchanted by this film have remarked on how it has such a unique sense of humour and deals with its premise exceptionally well, never resorting to the same taut cliches that would normally be used to support a flimsy premise. Palm Springs has a lot of merits, but one of its most impressive qualities is how it demonstrates that there is far more that goes into making an effective comedy than just writing strong jokes – Barbakow shows a remarkable ability to handle what is essentially an intimidating juggling act of many different thematic and filmic components, which only makes the fact that this is his first film all the more impressive. While there are numerous comedies produced every year that have promising ideas, very few of them actually manifest in a meaningful way, which makes what Barbakow does with Palm Springs all the more notable, since not only is he taking an audacious premise (which was impressively put together by Andy Siara, who is also making his feature film screenwriting debut), but realizing it in a way that actually carries some depth. Simmering below the boisterous and rowdy comedy is a wealth of ideas that don’t only exist to further the plot, but add nuance and an immense amount of charm as well, taking on a bold storyline with humour and depth that none of us could’ve expected from something as seemingly simple as this.

Like many great comedies, Palm Springs achieves only half of its brilliance through the strong premise, with the other half coming in how these ideas are brought to the screen. One of the most important methods to creating something special is to give it to talented actors to interpret, in the hopes that their abilities will sell the truth of it – why else do we have the oft-referenced adage of “dying is easy, comedy is hard?”. In this regard, Palm Springs hires two extremely charismatic performers, who are paired up and put to the test in a way that even their established careers in the entertainment industry weren’t going to be a sure sign that they would work well in this film. Andy Samberg is an actor normally reduced to subpar work that really doesn’t test him as an actor, despite many of his roles showing a glimmer of promise. He’s a very funny performer, but Palm Springs was a chance for him to make use of his bold sense of humour alongside his talents for slightly more dramatic material. The role of Nyles is not a particularly difficult one – he’s a lovable slacker who goes through life in a way that panders to his love of a banal existence, while still being driven by some attempt to escape the mundane existence he’s inadvertently found himself in. Contrast this with his co-lead, Cristin Miloti, who is just as wonderful, playing the frantic, paranoid Sarah who has yet to resign to her fate in the same way her partner has. Their chemistry is staggering – they’re both so incredibly funny, but not only do they manage to play off each other well in the more comedic moments, they both bring out the more subdued qualities of these characters. Far from the bland archetypes that normally occupy these roles, Nyles and Sarah feel like real characters, and the fact that the two leads are able to so convincingly play them, whether the scene calls for broad comedy or more nuanced, introspective drama, is truly impressive. They’re at the heart of the film, and make it absolutely worth watching all on their own.

The best kind of comedy are those that take you by surprise, and Palm Springs turns out to be one of the most intelligent films of the year, which is truly something quite extraordinary considered how unassuming the film is. Having the bold sense of humour of some of the canonical comedic classics, while being just as smart and insightful as towering works of science fiction, Palm Springs is a strange brew of a film, but one that really functions as something quite special. Normally with the most successful comedies, we can point to one or two elements that really push it over the edge and make it worthwhile – with Palm Springs, this is a lot more difficult since there are numerous components that play a role in its success. The humour is strong, the dialogue is sharp and insightful, the romance is soaringly beautiful and the philosophical underpinnings are profound. Incredibly original (even if it may be a direct descendent of other stories centred on time loops), and always entertaining, with not a single wasted moment or cheap joke to be found anywhere, Palm Springs is very special, always opting to take the higher road that results in something far more meaningful than we’d be led to believe. However, talk is certainly very cheap when it comes to something like this, and for anyone to fully comprehend the brilliance of this film, it needs to be experienced first-hand, which I doubt will be much of a problem, since Palm Springs is the kind of comedy that tends to linger, and will absolutely become better with time. 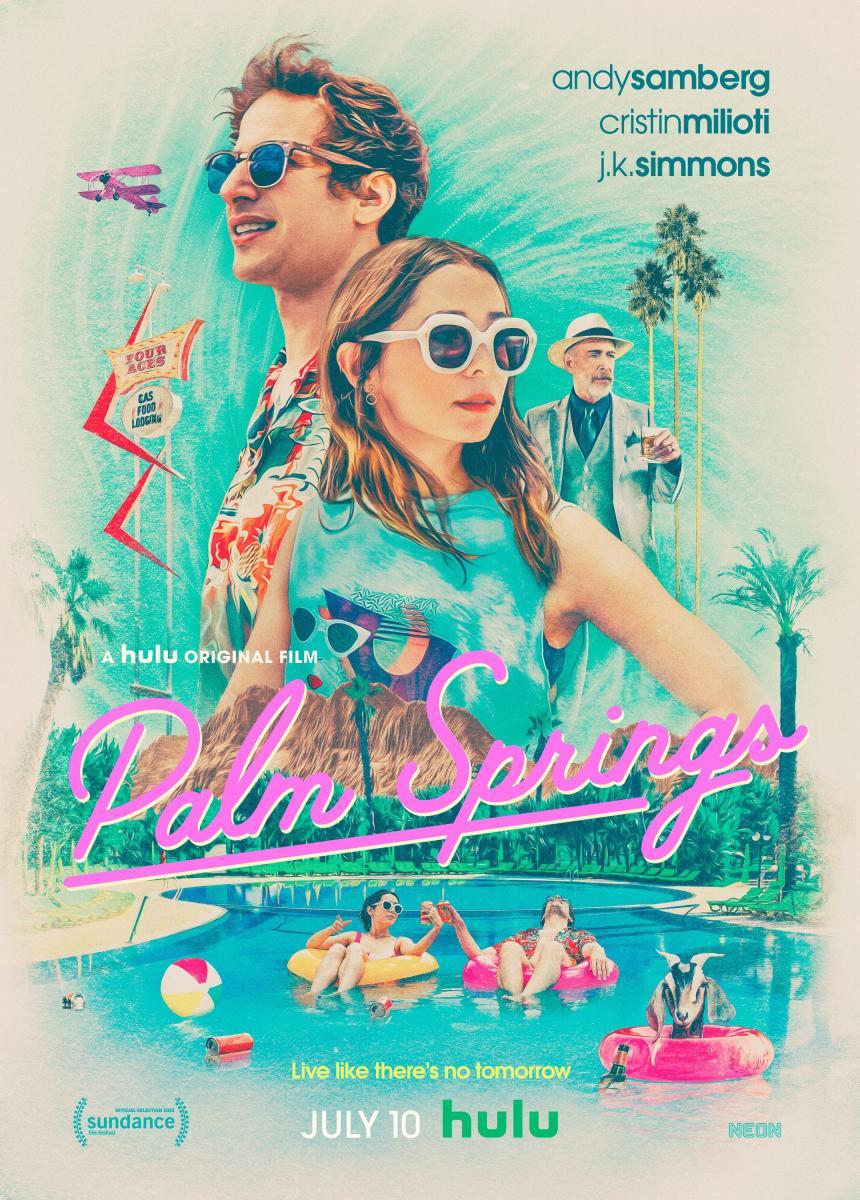